THE GHOSTS OF WAR 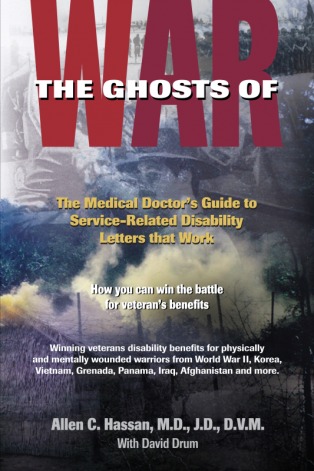 THE GHOSTS OF WAR: The Medical Doctor’s Guide to Service-Related Veteran’s Disability Letters That Work, released on July 4, is a book with a mission. That mission is to help America’s military veterans get the service-related disability benefits they truly deserve.

Military service is dangerous in many ways and health risks are not confined to injuries received in combat. Even a few years of military service can result in health problems which haunt many veterans later in life. Unfortunately, as a result of the long and tedious Veterans Administration claims process, many veterans don't get the service-related disability benefits to which they are truly entitled.

"There is nothing more patriotic than service to your country in the Armed Forces," says Dr. Allen C. Hassan, the author of The Ghosts of War, who is also a former U.S. Marine Corps. Sergeant, and a full Commander in the U.S. Coast Guard. "There is nothing more unpatriotic than trying to deny benefits to deserving and injured men and women who risk their lives to protect this country."

Unfortunately, even in this day and age, many veterans and their advocates do not realize that the key to winning benefits for service-related injuries or disabilities lies in establishing clear links between medical problems which began in the service and the veteran’s current medical condition.

Injuries or disabilities sustained during military service may be considered "the ghosts of war" when they return to haunt the lives of veterans. If this is the case, and if the appropriate connections are clearly demonstrated by the examining physician and proven to the satisfaction of Veterans Administration claims evaluators, the veteran will prevail with his or her claim.

Veterans who are eligible for benefits have the right to receive an independent assessment by a medical doctor. This assessment can be vitally important in helping to establish a valid claim for health problems which began during military service. While most medical doctors want to be helpful to their veteran patients, some physicians still do not understand how to write evaluations that establish a valid claim for service-related disability benefits with the VA.

Allen Hassan, MD, JD, DVM, is the foremost expert in the United States in evaluating military veterans for service-related disabilities, and one of the few American medical doctors with a sub-specialty in this area. A fighter for the rights of veterans, Dr. Hassan is making his considerable expertise and experience available to veterans and veteran’s advocates who need it with this new, useful book.

A medical doctor as well as a lawyer, Dr. Hassan’s evaluations have won service-related disability benefits for more than 3,000 American military veterans over the years. The Ghosts of War, the first book of its kind, includes a number of evaluations in the form of actual letters which succeeded in winning benefits for individual veterans from the Veterans Administration. Dr. Hassan's medical evaluations have produced triumphant results for American military veterans from every major conflict since World War II, including Korea, Vietnam, Bosnia-Herzegovia, Panama, Iraq, and Afghanistan as well as winning benefits for male and female veterans injured in non-combat situations.

Dr. Hassan’s medical and psychiatric evaluations are not only proven winners, they are classics of their type. The Ghosts of War provides useful, practical examples of successful medical evaluations in a variety of combat and non-combat situations. The Ghosts of War:The Medical Doctor's Guide to Service-Related Disability Letters That Work lights the way for American military veterans seeking to win the benefits they so richly and honestly deserve.